I hugged my 88 year old dad for the last time.

One year ago today I hugged my dad for the very last time.


When I lived in Southern California I would see my dad very regularly.  After moving to the Pacific North West,   I had to make special trips down south to see my dad but not nearly as often as I would have liked.

One year ago, I was heading back to the NW from Arizona and made a point of seeing my dad.

Our phone conversations were getting more worrisome being he spoke often of just being too tired to keep going.  I knew he was getting tired and I knew that the day would come when I would get that call but until then I would continue to visit as often as I could. 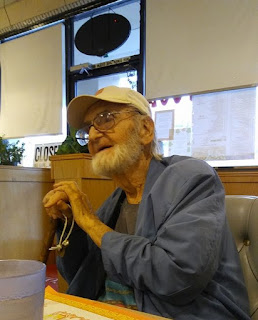 On the day of this picture, one year ago, as I hugged dad good bye I had a sinking feeling in my heart that this really was going to be the last time I eat with him, laughed at his humor and hugged him good bye.  That was a very strange feeling because I had not felt that ever before.  I just knew it was the last time I would hug my dad.

I was hoping to get to see dad by end of summer 2017, and I was trying my best to see how I could work it out with my job.  I received the call from a Riverside police officer that she had some bad news.  I knew instantly what is was as she informed me they found my dad deceased in him home.  It appears he died of a heart attack due to heart disease which none of us knew about. Mid August,  Dad had Died! 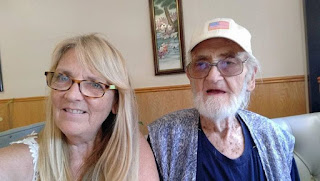 My next step was to get in the car and head to Southern California from the Northern coast of Oregon.  Heading to my dads house, my dad the hoarder, I was not sure what I would find but had to go be sure to get dad out of the morgue and to the mortuary.  My dad..and old cowboy, a good old boy, a big flirt and a man of much conversation and humor.. I will miss him.


Yes, one year ago today was the last time I hugged my 88 year old dad.
Love you DAD!


Posted by Catherine Watson at 1:35 PM

Search This Blog for...